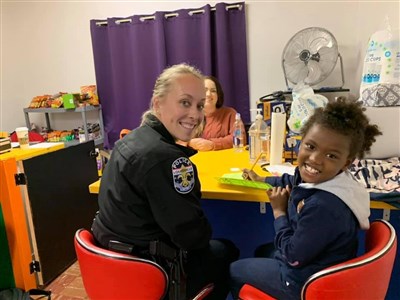 This is part of a series of testimonies that the SBC21 and Religion & Race teams invited people to share expressing their pain and hope, joy and tears, justice and accountability around the issue of race and reconciliation in America and the United Methodist Church. This article submitted by Rev. Corey Nelson, pastor of Grace Kids: A Church for Children, shows the importance of building relationships, even from an early age.

Now for a testimonial that I would’ve never dreamed in a million years, six months ago, would have the potential to be controversial and to cost me friends. Before I go any further, please know that I will not tolerate anyone who attempts to politicize this. I’ll ban you from my Facebook account in a heartbeat. Pastor Corey ain’t playing.

I wrote a piece a couple of weeks ago, which I didn’t share, about not being a pastor about “causes.” I think too many pastors get overly caught up in identities, labels and causes to the point that they are blind to a huge part of their ministries. Me? I try to address whatever God puts in front of me, pure and simple. Sometimes I’m really good at that and other times not so much, but I always try to operate from that space.

For example, I did not come to Louisville to be an urban pastor, a church planter, a “social justice warrior” or the pastor of a bunch of kids, and look what happened. The flip side? Stick me back out in the country and something different will happen.

One of the things that was in front of me from day one was my community’s relationship with law enforcement. In the early days, if the police were present in the neighborhood, the kids wouldn’t come out ... period. It would be like a ghost town down there. In time, I would begin to learn why. The reasons, both real and perceived, were a problem, for all parties, including me.

My sister’s husband is a retired police officer and my wife’s sister is a police officer. They are two of the finest human beings I’ve ever met, and because of them I have a soft spot for our officers.

Seeing what I saw taking place in my neighborhood was a problem that needed to be addressed. I began inviting the police into our space at Grace Kids: A Church for Children to try and begin building healthy relationships and respect.

The first time I invited the police to the church seven years ago? My good friend John Douglas pulled up in his police vehicle with Arby’s for all the kids. The response? Several of the kids scattered and hid in the church, including a 4-year-old who suddenly believed that all of the adults were police. This was a tough beginning, but Johnny stayed patient and built a foundation that allowed those that came after him an easier time.

Now? Well, at least prior to the past several months, our officers are some of the most popular people in the church. The kids flock to the church if there is a squad car there. And if Officer Brittany, another LMPD officer, shows up? It’s suddenly, “Pastor Corey who?”

These officers have invested their own time, resources and hearts to build bridges and relationships. They’ve taken the kids to movies; they’ve brought cookies, food, and treats; they’ve helped with Christmas and with homework. While the bad ones get the press, there are many more who are quietly putting in the work to make the world a better place. Isn’t this what the kingdom is about?


The world has changed rapidly over these past several months. There are very serious issues at hand that have long needed addressing. That’s on all of us. I don’t pretend to know what things will be like when we’re all back at the church together, but what I do know is that the work these officers have done with these kids will not have been in vain.

I am so thankful for our officers who spend their time at Grace, and I’m also so thankful that our kids were willing to give them a chance. There is hope, folks, and Grace Kids will be at the forefront of growing it with our friends.