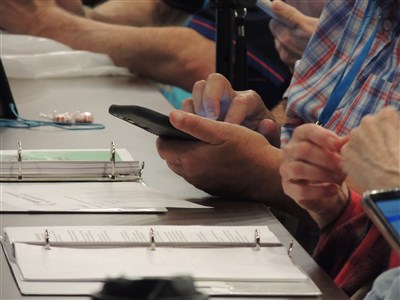 OWENSBORO, Kentucky – A full day of worship Tuesday at the 2022 Kentucky Annual Conference started with a commemoration of clergy and spouses who have passed away in the past year and concluded at the end of the day with the missional offering to benefit tornado relief and the Kentucky United Methodist Children’s Homes.

Some of the business items that took place included updates from the Board of Pensions and the Board of Trustees.

The day concluded with an evening of fellowship along the Ohio River, punctuated with local food trucks and bluegrass bands. 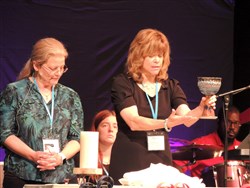 During the Memorial Service with Holy Communion service in the morning, 25 clergy and nine spouses were remembered and honored:

Board of Pensions update

During the afternoon session while Rev. David Garvin, the Conference Treasurer, and Rev. Keith Switzer, Board of Pensions Chair, were presenting their report, a motion was made by Mark Stallons.

The wording reads: “I move that the Board of Pensions work with Wespath to explore if there is a way for the current assets to cover the unfunded pension liabilities and unfunded retirement health care liabilities for all churches of the Kentucky Annual Conference.”

Stallons said the goal is to encourage financial stewardship and transparency.

Switzer said the board would not oppose it, but some on the floor expressed concerns during the ensuing discussion and debate.

Rev. David Miller, the Chaplain of Union College in Barbourville, said he has heard that other annual conferences have used this as a “stealth maneuver” to circumvent the disaffiliation process. Several others also gave an opinion for or against, and a few asked for additional clarifications.

The members voted 542-146 to explore the option outlined in the motion. 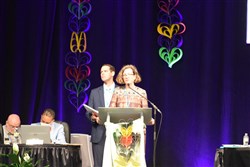 Earlier in the day, Garvin and Gretchen Mahaffey, Board of Trustees Chair, went through a detailed explanation of how the human sexuality disaffiliation paragraph of the Book of Discipline, Paragraph 2553 works for churches. Afterward, eight churches that have gone through the disaffiliation process were approved to leave the Conference.

Mahaffey said the process, which includes specific requirements on how apportionments, property and pension liability are handled, has been “courteous and gracious.”

The eight churches approved to disaffiliate are: Bruce’s Chapel, Chandler’s Chapel, Chestnut Grove, Grace on a Hill, Old Concord, Smiths Chapel, Stark, and Trinity. That brings the number of Conference churches that have left under Paragraph 2553 to 15, Mahaffey said.

At the end of the presentation, Bishop Leonard Fairley offered a prayer for the departing churches and their congregations: “These are our brothers and sisters, and remain so, he said.

Mahaffey and Garvin also reported that the trustees are working with a broker to best market the Kavanaugh Camp and Retreat Center property, adjacent to the Conference Office in Crestwood, to eventually be sold. The equipment there has been made available to Loucon and Aldersgate Camps, they said.

Rev. William Moore, the Conference’s Director of Connectional Ministries, presented an update on a discernment tool that the Bishop’s Operational Team has been working on. A task team led by Moore spent the past few months putting together a workbook outlining a process for discernment, and several churches are currently testing it.

The discernment process is designed primarily around helping churches decide whether to stay or go, but it can be used in any season of discernment. It is designed to continue the Conference’s work of making passionate spiritual disciples of Jesus Christ for the transformation of the world, Moore said.

The workbook is expected to be ready by early August. In the meantime, Moore said other churches or ministry areas interested in testing the process can email him at wmoore@kyumc.org.

After Moore spoke, Fairley said that we all should be excited about discernment. “William said it right: The world, our church, our communities, they need us to be making and following great discernment.”

Morse said that he teaches that every disaster starts locally, recovery must be driven locally, and must end locally. “I am Happy to tell you that our local chuches in the disaster area took this to heart … and leaped immediately into action.”

The recovery process will take 3-5 years, he said, and he urged people to volunteer for mission work in the affected areas and also urged them to take advantage of the disaster-response instruction offered by the Conference. Email Morse at jmorse@kyumc.org for information or check the www.kyumc.org website.

The Mission offering on behalf of the Children’s Homes and for tornado relief was the last business item of the day. That total will be announced Wednesday.

Rev. Julie Hager Love, Executive Director of the Children’s Homes, said before the offering that the proceeds from it will be used for capital needs on the two campuses. Located in Owensboro and Nicholasville. The Children’s Homes are celebrating 150 years in Kentucky. 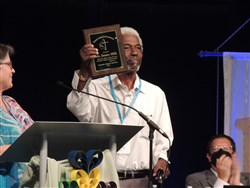 Jimmy Mills received the lay award. He leads an ecumenical interfaith group that works for justice in Louisville. Rev. John Gallaher received the clergy award for his work with Embrace in Lexington. Rev. Lisa May, Goshen Pastor, made the presentation.