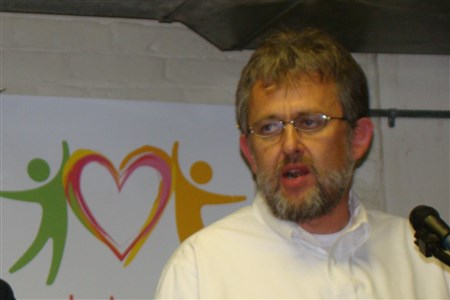 Stoess, who has ministered in the city’s west-end Portland neighborhood since 1996, has written a book about that ministerial journey, “Think Red: Imagine Your Community Living and Loving Like Jesus.” The color reference is to the red letters that many Bibles use when quoting Jesus.

Published in late 2021, the book has served as an exclamation point of sorts for Larry and Kathie Stoess’ ministry there as he prepares to retire Dec. 31.

“It just felt like time,” Stoess, who turned 65 in November, said in a recent Zoom interview. He said that things are going well with the ministries he and Kathie were instrumental in building during their time in Portland, one of Louisville’s most diverse but economically challenged neighborhoods.

Stoess became executive director of the Portland Promise Center shortly after earning his doctoral in ministry from Louisville Presbyterian Seminary. At the time he assumed that, in typical UMC clergy fashion, he would serve there for five or so years and then be reappointed. Twenty-seven years later, he is just now wrapping up his time there and preparing for whatever retirement holds.

He recalls that while in seminary he had been working two part-time jobs, one in a wealthy east-side church, the other in the Promise Center’s after-school program. Those dual experiences proved transformational.

“I could just sense when I felt alive and passionate and where my life was making a difference,” Stoess said, so when he had a chance to become executive director, he jumped at the chance. He served in that role until 2012. At that point he became, as he calls it, an accidental church planter, working with a few key people in the neighborhood and partnering with the Kentucky Annual Conference’s New Church Development ministry to launch Church of the Promise.

One of the transformational moments for the Stoesses was their decision to actually move into the neighborhood after commuting for three years from Crestwood, Kentucky – easily a half-hour’s drive even on a light-traffic day. They not only saved a lot on gas money, they also fell in love with the neighborhood.

“Their problems became my problems,” he said. “And instead of serving my neighbor – serving the folks who lived in Portland – we were working side by side with my neighbors.”

He calls Portland a unique neighborhood, and despite the challenges cites the beautiful old homes in one of the most racially, culturally, and economically diverse areas in Louisville. 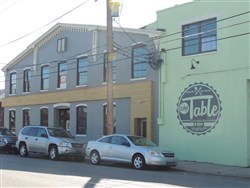 “Think Red” describes in great detail the development of the Portland ministries, which include not only Church of the Promise but The Table, a pay-what-you-can lunch café that is part of the church, and Promise Housing Plus, a nonprofit construction company that is renovating homes while also providing employment opportunities – and affordable housing opportunities – for neighborhood residents. An active Celebrate Recovery program is also a key part of the ministry.

The blurb on the back of the book summarizes it well: Have you ever wondered what the church would look like if Christians began to take the words of Jesus seriously – the words some Bibles print in red? What if Jesus actually meant for us to do the things he said? What if those who “believe in Jesus” really did value the things he valued? Would the church look different? Would your neighborhood stay the same?

The 137-page book is an easy but thought-provoking read. It is divided into eight chapters, six “Red Letter Values” – Love and Friendship, Downward Mobility, Human Dignity, Radical Generosity, Small Beginnings, and New Beginnings; the “Red Letter Vision: A Healing Land”; and the “Red Letter Mission: Live and Love Like Jesus.” Each chapter ends with a series of “Red Letter Questions” that can be used for reflection either in individual or group settings.

The book is chock-full of anecdotes of their time in Portland that describe how they do ministry, visioning, and planning. Stoess said in the interview that he doesn’t think we talk enough about Jesus’ vision for the Kingdom of God on Earth. Instead, we focus on “church-centric” models heavily focused on Sunday services rather than what could happen in the neighborhood the other six days of the week.

Stoess said he’s been looking for a way to let leaders know the book is available and what new expressions of faith can look like. He is well-versed in adaptive leadership as well as missional and entrepreneurial church – all of which are represented in the various Portland ministries.

“That’s kind of my heart there in the book, looking for ways to inspire people to create what I call whimsical expressions of Christian community,” he said.

Rev. Becki Curry, a friend of Stoess’ who was his district superintendent from 2010-2017, served as part of the design team for Church of the Promise, circa 2011-2012. (She gets a shout-out in the book for her work on that team and the moral and spiritual encouragement she provided.)

“It was just a joy to be able to work with him in developing Church of the Promise,” Curry said. “We had so much fun. Seeing Larry respond to the call of God, seeing it come together step by step, was just wonderful.”

She added: “Larry embraced that community. He has a vision for that community, and he worked his tail off to realize that vision.” Or as Stoess put it: “Everything we’ve been doing has been community-focused: How do we bring healing to the neighborhood” and allow people to experience life as it’s meant to be lived?

One of the many anecdotes in the book – which Stoess also talked about in the interview – was how Church of the Promise came to be. It started with a small but gradually growing group of people gathering on Sunday mornings to pray. Years of prayer eventually led to the vision of the church, and the design team was formed. One member of the team – a local who had been in the Celebrate Recovery program – said, “I think God wants us to be more than a healed land. I think we’re supposed to be part of a healing land.” That, Stoess said, “took it to a whole new level” in terms of their team’s vision.

Stoess said their ministry has just been one piece of the Holy Spirit’s work in recent years. Asked how Portland has changed since they got there, he said: “It’s a lot different. A lot of neighbors who have moved into the neighborhood have moved because they love Jesus and they feel called to the neighborhood.”

Since 2012, Stoess can recall at least four or five faith-based businesses that have opened that aren’t affiliated with Church of the Promise or the Promise Center – restaurants, a café, a pub. All are led by Christians who have moved to the area in response to the Holy Spirit’s nudging – often from other parts of the country, he said.

“There is just a real rich expression of missional communities, of people who love Jesus, living in the neighborhood, loving their neighbors and loving others,” Stoess said.

Starting Jan. 1, his son, Rev. Ryan Stoess, will become pastor at Church of the Promise. The co-pastor will be another neighborhood fixture, Rev. Luke Chase. Both are part-time licensed local pastors – and they are best friends.

Ryan Stoess, 37, said he and Chase haven’t exactly figured out yet how the new ministry leadership will work, although he will remain executive director of the nonprofit housing business. Buying a run-down house across from his parents’ and gradually renovating it had been the impetus for the business. He and his wife, Ashia, and their three children now live there.

“I’m looking forward to it,” the younger Stoess said of his expanded role. “I think it’ll be a lot of fun” to continue to develop ways of doing church that go way beyond gathering for an hour on Sunday mornings. “The days of Billy Graham are long gone – the single charismatic superstar leader days are over, and they really need to be.”

As for the elder Stoess, he said that he and Kathie plan to continue to live in Portland – but will spend some time in Florida and at Nolin Lake to let the new church leadership get established. While in Florida, he will help lead a workshop on entrepreneurial church-planting at Exponential Orlando, a conference held each year in late winter that attracts thousands of active and prospective church planters.

Retirement plans also include some writing and speaking at churches. (Faith communities interested in having him speak can email him at larry.stoess@gmail.com.) He also might do some coaching and will remain active in neighborhood ministry on the boards of The Table and Promise Housing.

He is looking forward to retirement but knows that being out of the day-to-day ministry work will be an adjustment. “It’s been a very joy-filled journey, and I will miss it greatly.”

TO ORDER THE BOOK