The three resolutions — “Leading with Integrity,” “Queer Delegates’ Call to Center Justice and Empowerment for LGBTQIA+ People in the UMC” and “Resolution in Support of a U.S. Regional Conference” — had previously been submitted for consideration by the SEJ’s newly created Agenda Committee. However, that committee recommended Wednesday that the resolutions not be considered by the body, believing them to violate a jurisdictional rule or process or exceeding authority set forth in the Book of Discipline.

The body disagreed, voting 222-128 to appeal the committee’s decision and allow the resolutions to be considered Thursday when episcopal elections were complete.
Under presiding Bishop L. Jonathan Holston, the submitters of each resolution were called forward to explain the details so the body could more thoroughly understand what they were voting upon.

“Leading with Integrity,” submitted by Tennessee lay delegate Jim Allen and newly elected Bishop Robin Dease, of South Carolina, passed without amendment. The resolution urges those who intend to disaffiliate from the United Methodist Church to recuse themselves from leadership roles in the UMC to move forward in fairness and integrity. It also encourages annual conference boards to develop codes of conduct to manage conflicts of interest. 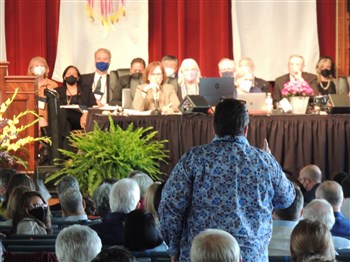 “Queer Delegates’ Call to Center Justice and Empowerment for LGBTQIA+ People in the UMC,” submitted by nine gay delegates in the SEJ, passed with one amendment changing a word in the resolution from “commit” to “aspire” in an effort to make the resolution more aspirational for the SEJ and, therefore, legal.
The resolution urges the SEJ to support LGBTQIA+ people, affirm a moratorium on lawsuits and complaints surrounding sexual orientation, not pursue (or resolve in a non-punitive and just manner) complaints against bishops around their sexual orientation or who officiate LGBTQIA+ weddings, and support elections of bishops who uphold this.

Holston ruled the resolution out of order because its language seemed to call for the SEJ to violate the Discipline.

However, as he prepared to move to the next resolution before the body, a peaceful protest began on the floor. Several submitters and supporters of the resolution stood in solidarity, some standing directly in front of the dais where the bishop sat. One man asked for a rule of law objecting to Holston’s decision, and some threw their credentials onstage and walked out of Stuart Auditorium. Others gathered up front in protest.

“Resolution in Support of a U.S. Regional Conference,” submitted by the Rev. Lisa Yebuah, North Carolina clergy delegate, and Martha E. Stokes, Virginia lay delegate, also passed, though like the others, with much debate.

The resolution urges the SEJ to support proposals and expedite processes to help create a regional conference and support the Christmas Covenant and the Connectional Table’s proposals in that vein.

Yebuah said the resolution comes after a realization that “we are incredibly western and U.S.-centric in the way we do our work.”

Some spoke against the amendment, including Rev. Tiwirai Kufarimai, a clergy delegate from the North Alabama Conference originally from Zimbabwe, who said the SEJ doesn’t need to vote for Africans; they can vote for themselves.

Bishops’ assignments were to be announced late Thursday, but with the backlog of business and debate and the continued deliberations of the Committee on Episcopacy, they were delayed until Friday morning.

Third bishop elected
It took the entire afternoon and into the evening, but on the 25th ballot, the SEJ elected South Carolina’s Rev. Dr. Robin Dease as its third and final bishop. Dease’s 206 votes put her over the edge in the election, which had been close most of the day as she and fellow South Carolina nominee Rev. Ken Nelson were closely tied, sometimes with Nelson in the lead and sometimes Dease. 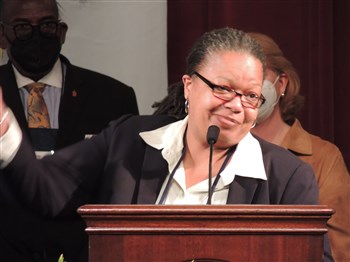 Dease’s election was by some accounts a surprise, as she was a write-in nominee whose name first appeared on the first ballot Wednesday, after which she declined the nomination.

In declining, she’d elaborated on some of her views: “I want to be transparent: I do not believe homosexuality is a sin. I do believe that same-gender-loving persons can love and marry. I also believe they can be called by God, ordained and serve our churches well. But you also need to know this is not the only issue we face as a church.”

Dease cited several concerns that impact the church, including the Black church, others of color, the elderly and the young.
“I believe in building bridges, not tearing them down.”

It took four hours and the 25th ballot before she reached the 60% threshold to be elected.

Alvarez withdraws
Thursday morning, Kentucky’s nominee for the episcopacy, Rev. Dr. Iosmar Alvarez, withdrew from consideration as his vote totals were well behind other candidates’. Alvarez is superintendent of the Lexington District.

SEJ 2024 dates announced
Bishop Debra Wallace-Padgett announced during her time presiding that the next Jurisdictional Conference will be July 10-13, 2024.

Brodie is a writer with the South Carolina United Methodist Advocate. Alan Wild of the Kentucky Annual Conference staff contributed.