Speaker at King commemoration calls for church to lead the way in love, reconciliation

LOUISVILLE, Ky. – A two-hour worship service commemorating Rev. Dr. Martin Luther King Jr.’s birthday culminated in a moving altar call, as more than two dozen people went to the front of the Crescent Hill UMC sanctuary Saturday, Jan. 14, to rededicate themselves to King’s dream of racial equality and harmony – and the church’s role in making that happen.

“Our God is a God of hope. Even when we don’t feel it, you are moving,” said Rev. LeTicia Preacely, who served as worship leader and co-led the altar call along with the service’s keynote speaker, Rev. Dr. Vance P. Ross, senior pastor of Central UMC in Atlanta.

Preacely, who serves at The Source, a campus of Southern Hills UMC in Lexington, prayed for unity in both the country and the church and for us to heed the voice of God.
“Though we disagree, help us to disagree in a way that’s worthy of your name,” she said. “… Lord, we ask that you help us to bear your cross today.”

About 70 people – African-American and white -- attended the worship service, which was sponsored by the Kentucky Annual Conference’s Commission on Religion and Race. Bishop Leonard Fairley had planned to attend but ended up having to miss because he underwent successful treatment Friday for three tears in his retina; Rev. Dr. John Hatton, superintendent of the conference’s Heartland District, covered his part of the program. 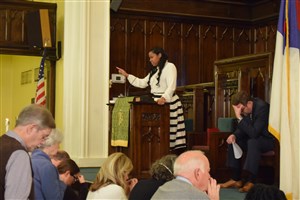 The altar call came at the end of Ross’ 38-minute message – keying on the theme “Faith Communities in the Midst of the Dream: The Time is Now.” It was a mixture of lament at the shameful history of race relations dating back hundreds of years and hope at the progress that has been made since, culminating in the 2008 election of Barack Obama, the country’s first Black president.

But that was quickly followed by the return of white supremacists and racial animosity that the church must be a key player in expunging, Ross said. It has been a series of steps both forward and backward – the end of slavery followed by the injustices during Reconstruction and the Jim Crow era, he said.

Ross led into his message by reading from Romans 5, focusing specifically on verses 3-5: We can rejoice, too, when we run into problems and trials, for we know that they help us develop endurance. And endurance develops strength of character, and character strengthens our confident hope of salvation. And this hope will not lead to disappointment. For we know how dearly God loves us, because he has given us the Holy Spirit to fill our hearts with his love.

Ross was adamant that the church – which so often has fallen short in leading on equality – must do better in these trying days.

Our God is a God of empowerment, he emphasized: “When we dare to dream, we will see God’s kingdom come, on Earth as it is in heaven.”

“So, the question is not whether we will be extremists, but what kind of extremists we will be,” Ross said.

“God can heal the epidemic of gun violence, overcome the virus of disaffiliation, overcome the pandemic of white supremacy, and bring to bear equity, equality, fairness and justice,” Ross said,
drawing enthusiastic shouts and clapping from the congregation. (At one point earlier, Ross had jokingly chided people for quietly listening as UMC worshipers are wont to do, which is in conflict with the Black tradition to be more demonstrative in worship – and the crowd took it to heart during the rest of his message.)

Ross also shared at the beginning of his comments that he received tragic news Friday that his 30-year-old nephew had died unexpectedly. “Every moment is a gift from God,” he said somberly. “… Take it not for granted.”

Jan Brown-Thompson, who serves as chair of the Commission on Religion and Race, said afterward that she hopes the service again becomes an annual commemoration held by the conference. She called it “a wonderful, powerful, spiritual-filled day to honor Dr. King,” adding that Ross’ parting charge to share the love of Christ was powerful.

“It’s going to be up to us, the church, to reach out to the world and share the love of Christ” and bring us together. The church must model that love: “If not us, who?” she asked. 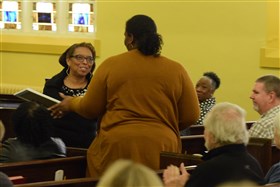 During the service, Jonna Carter, the conference’s co-lay leader, honored the late Rev. Dr. Kathy Goodwin, who served in ministry in the conference for more than 25 years. Goodwin died unexpectedly last August. At the time she was serving as pastor at Crescent Hill and Buechel UMCs and also was chair of the Strengthening the Black Church in the 21st Century team. (Preacely, Saturday’s worship leader, is now the chair of SBC21.)

Goodwin “meant a lot to each of us,” Carter said, presenting a certificate to her daughter, Alexis. “We will always be grateful for her dedication and commitment.”

Hamilton is associate director of Connectional Ministries for New Faith Communities and Multi-Ethnic Initiatives in the Oklahoma Annual Conference. Davis is a human resource professional, motivational speaker and chair of the UMC’s Southeastern Jurisdiction Monitoring Team, and Burks is chaplain/director of social responsibility at the Gaston County Family YMCA and executive director of the Gaston Faith Network.


View photos from the morning workshops

View photos from the worship service