Walk and worship for healing 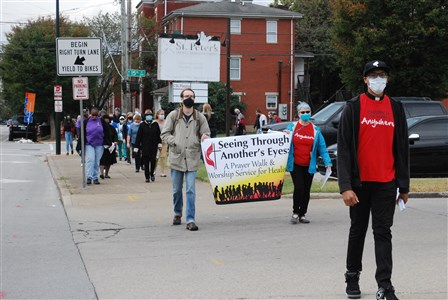 United Methodists gathered in downtown Louisville Sunday, Oct. 4, for a prayer walk and service “because the Lord requires it” to share a message of hope, love and peace with a hurting community, Bishop Leonard Fairley said.

Nearly 125 lay and clergy from the Kentucky Annual Conference participated in the event, “Seeing Through Another’s Eyes: A Prayer Walk & Worship Service for Healing,” which started at 1407 W. Jefferson St. and moved east to Jefferson Square downtown – the site of daily protests and vigils since late May in honor of Breonna Taylor. 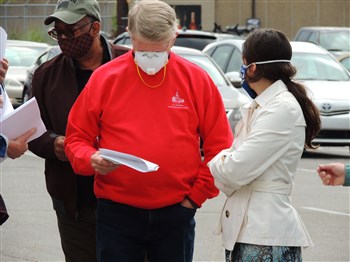 A number of churches in Louisville – large and small, African American and white – were represented. At least one person, Rev. Brad Smart, the Kentucky East District Superintendent, came from Morehead, about a two-hour drive from Louisville.  At the same time, a group from Paintsville First UMC and nearby Mayo UMC, marched in solidarity in Paintsville. Dozens of others took part virtually in the Louisville event on the Conference Facebook Live feed.

The short worship service, which was covered by at least two Louisville television stations, included Holy Communion. Sunday was World Communion Day, and a number of denominations, including United Methodists, recognize the annual event. Fairley said it wasn’t coincidence that the prayer walk was held the same day.

Word about the prayer walk and service went out just a few days ago, and between the short notice and the iffy weather – light rain showers occasionally fell, although the sun peeked through the clouds a few times -- Rev. Patty Groot, one of the organizers, said afterward that she was very pleased with the turnout.

People gathered shortly before 2 p.m. in the 1400 block of West Jefferson Street for the roughly one-mile walk to Jefferson Square. Groot, the Bridge Pastor at Christ Church United Methodist in eastern Louisville, gave participants instructions, reminding them to “keep that 6 feet of love” between other people to minimize the risk of spreading COVID-19. Participants also were told to wear a facial covering and to stay on the sidewalks.
“I want to remind you that this is a prayer walk, not a demonstration,” Groot said. “There is a difference.”

She listed several landmarks between the parking lot and Jefferson Square to think about and pray over during the walk, including Ninth Street, also known as the “Ninth Street Divide” because “redlining maps” created in the 1930s to aid development left out people on the “wrong” side of the divide, and they’re still feeling those effects today, Groot said.

Of Jefferson Square, she said, “I want you to enter that square as you would enter the living room of a person who is grieving.”

Then after a short time of individual prayer, Rev. Jacob Cogman, another pastor at Christ Church, led the group out of the parking lot and east on Jefferson, weaving across the street several times to avoid construction of 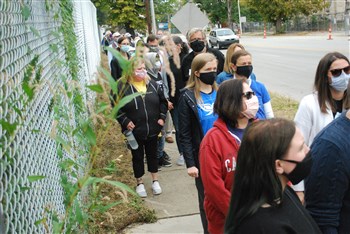 mixed-income housing and the demolition/renovation of Beecher Terrace, one of Louisville’s last housing complexes.

At the square, the group paused briefly at a shrine in honor of Taylor, an emergency room technician killed by Louisville Metro Police officers March 13 while attempting to serve a warrant at her apartment in southwest Louisville. Word of her death about the same time that Minneapolis police killed George Floyd during an arrest set off protests and demonstrations across the nation. Some of the demonstrations in Louisville have occasionally turned violent.

It was a solemn moment as the United Methodist group circled the shrine and paused before moving farther into the square to the staging area for the worship service and Holy Communion.

Besides Fairley, a number of Kentucky clergy prayed, read Scripture and briefly spoke, including Rev. William Moore, Director of Connectional Ministries for the Kentucky Conference, and Rev. Dr. John Hatton, Heartland District Superintendent. Louisville is part of the Heartland District.

During his welcoming comments, Moore stressed that the goal is not for this to be a one-time thing but to use it as a springboard to connect and pray with those in need and who are hurting. He invited participants to fill out prayer cards so that the Conference’s nearly 800 churches can know specific wants and needs as they pray.

Black and white clergy took part in reading Scripture, praying and speaking, and while the tone of the service was generally quiet and somber, there were moments when one would speak or pray passionately, prompting applause and “amens.”

During Fairley’s brief remarks, titled “A Word of Hope,” he prayed that those gathered would open their minds, hearts and souls to hear the words of justice and peace. 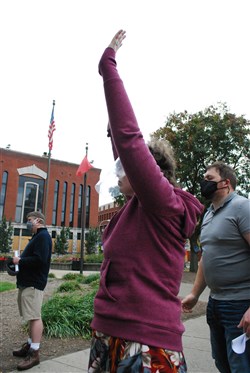 He said he can’t begin to imagine the pain and anguish that Breonna Taylor’s mother is feeling. But he also harshly spoke against reacting with violence directed toward the police or anyone else.
“Louisville, we are better than that!” Fairley said, as people clapped in agreement.

The Bishop then led Holy Communion, with clergy invited to assist in distributing individual sanitary packets of wafers and juice in small plastic containers. Fairley, who is African American and grew up poor in rural North Carolina, said, “In my life there were a lot of tables that I was not welcome to, but not this one,” referring to the communion table.

After the service, about two dozen people from the group stopped briefly outside police headquarters, just across from Jefferson Square, and offered a blessing. Fairley prayed for their protection and for God to remind them that “they are your children and that prayers are being lifted up for them.”

Groot said afterward not only that she was impressed with the turnout on short notice on a cool, overcast day, but was touched by the number of laity who turned out to walk and pray.

She also said she was personally touched when the group paused on the way into Jefferson Square to quietly honor Taylor’s memory. “It was beautiful,” Groot said.