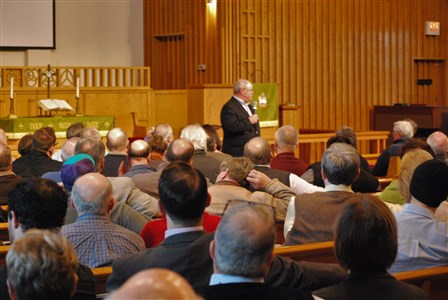 The afternoon meeting was for clergy from the Kentucky Annual Conference. About 200 people packed into the Lexington Centenary UMC chapel for that meeting. The evening meeting was held in the church’s spacious sanctuary; about 200 people attended it, as well.

Revs. Keith Boyette and Walter Fenton, WCA President and Vice President, respectively, spoke at both of Thursday’s meetings and covered essentially the same information about the WCA’s history and philosophy and also the recently announced “Protocol of Reconciliation and Grace Through Separation.” Both meetings also set aside question-and-answer time.
Both sessions were generally low-key affairs, with information presented and questions asked. There was occasional muted applause and “amens” when Boyette or Fenton would make a particularly salient point.

At the evening meeting, Fenton, who spoke first, said this was a “season of uncertainty” but also a “season of hope” in the UMC. He detailed the church history involving LGBTQ rights and involvement going back to the 1972 General Conference, when the church first adopted language addressing human sexuality.

He said the WCA was formed in 2016 in response to growing “ecclesial defiance” among annual conferences and churches involving LGBTQ persons, with same-sex weddings and appointments of openly gay clergy. The church’s official stance, affirmed at a special General Conference in 2019, prohibits practicing gay clergy and same-sex weddings but recognizes everyone’s human worth and specifies that the UMC welcomes them in its churches.

Fenton said that reporting by the national media after the Protocol proposal was announced often made it sound as if the UMC didn’t address sexuality until very recently.
(National media also frequently, and incorrectly, reported that the Protocol – announced Jan. 3 by liberal, centrist and progressive negotiators – was a done deal. It is one of several separation plans that will be debated at General Conference in May 2020, and nothing is official until the delegates vote.)

Boyette and Fenton both talked about the Protocol, saying that what makes it unique is that people from all across the spectrum were at the table and have agreed to back this proposal. They recently finished drafting the legislation that will be put forth at General Conference. They have sent it to their full team to affirm the legislation and hope to have it out this coming week for the public to view.

Boyette said at both meetings that the current plan would allow individual churches to vote to leave immediately after the General Conference in May.

Both meetings also addressed how church assets would be divided. The speakers stressed that the so-called “trust clause” would no longer be in effect, meaning that if a church voted to leave, it could keep its assets. Pension liabilities would be transferred to the new denomination, and churches would fund them at the current apportionment rate.

Regarding clergy and church structure, one key change would be 12-year term limits on bishops. District superintendents would be eliminated and replaced with “presiding elders.” Districts would consist of no more than 30 churches, and conferences would contain no more than 500 churches. Churches also would have a larger role in choosing their pastors in an approach that is being called a modified send/sent system. No pastors would have a guaranteed appointment.

Boyette also criticized the current church’s various boards and administrative personnel. The new denomination would be organized as a “leaner, more nimble church” with great accountability, he said.

In response to a question at the evening meeting, Boyette said the new church will be very committed to attracting women and minority clergy to serve.

In response to another question, Boyette said the name of the new denomination has yet to be determined, although he expects “Methodist” to be part of the new name. The name will be determined before General Conference meets this May, he said.

View photo gallery from the event