‘We were just overwhelmed with so many people’ 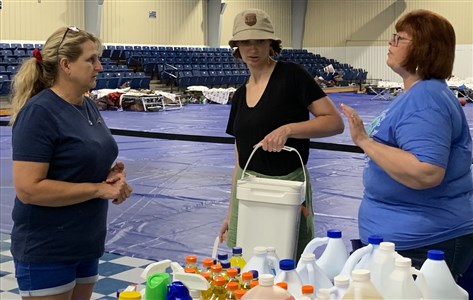 Sandy Penix, of Pikeville, is the Co-Disaster Response Coordinator for the Kentucky East District. This was her experience helping at one of the relief sites.

I went down to the Martin Community Center (in Prestonsburg) on Saturday to see how things were going, and it ended up I never got to leave. It was absolutely crazy.

The Garrett community took 100 buckets out to their communities using the Garrett Volunteer Fire Department. And then we gave out bucket after bucket one at a time, but we were just overwhelmed with so many people. They came from Hindman, and all over. The Red Cross signed in and got the names and addresses of each person who came through and will give us a count in the next couple of days. 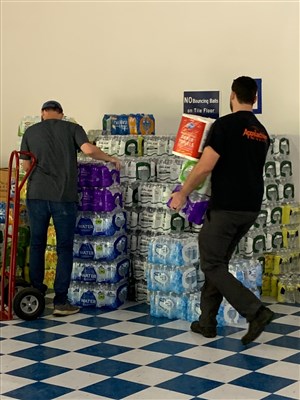 It was a tough day sharing hope and love with so many. We prayed with many of them. One lady in particular really struck me. She was by herself. She was probably around 65 or so. She came in and seemed great until she got up to the table where we were. We started talking to her, acknowledging her loss, and she put her hands over her face and just broke down crying. We all gathered around her, and I prayed with her. It still brings tears as I write.

So many stories just like this. Everything washed away. They got out by the skin of their teeth. One young lady had a 9-year-old son with autism. She said she was having trouble helping him understand what was going on. Someone had brought in some fidget toys that we gave him.

There were some beautiful moments. People coming in all day, ordinary people. Most of them looked like they really didn’t have a lot of money, bringing supplies in throughout the entire day. It was a beautiful thing to see. And it seemed like they would bring in exactly what we had just run out of. The Lord showed up!!!

Tabitha and Darrell Johnson stayed all day to help us. She just had rotator cuff surgery and could only use one 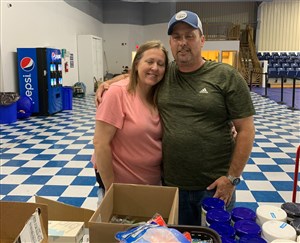 arm. He had a liver transplant a month and a half ago. They also provided a TV for the displaced children at the center. Beautiful. I saw Christ in these and so many others.

We did pretty well with having about everything we needed today. But that was today. There were 48 flood buckets when I left. There was plenty of food for people who came in. They had tables set up with lunch and dinner. The Red Cross really did a wonderful job.

Roy Harlow (Graceway UMC Pastor), said their church provided lunch and dinner for the Floyd County community along with going door to door and handing out 100 buckets they had stored in their facility. They were a true blessing. His last words this evening were, “It was a good day.”